I was thinking the other about how many times I see the word BEST when I google something - especially a recipe. Evidently EVERYTHING is the best. So I thought to myself, I am gonna cool it with using that word. It is highly subjective and overused. Then I realized, when any food blogger says it's the best - you're god damn right it is the best. The best to them for sure. We all work hard creating what we consider THE BEST and we use that word and mean it. Like this - the BEST carrot cake. 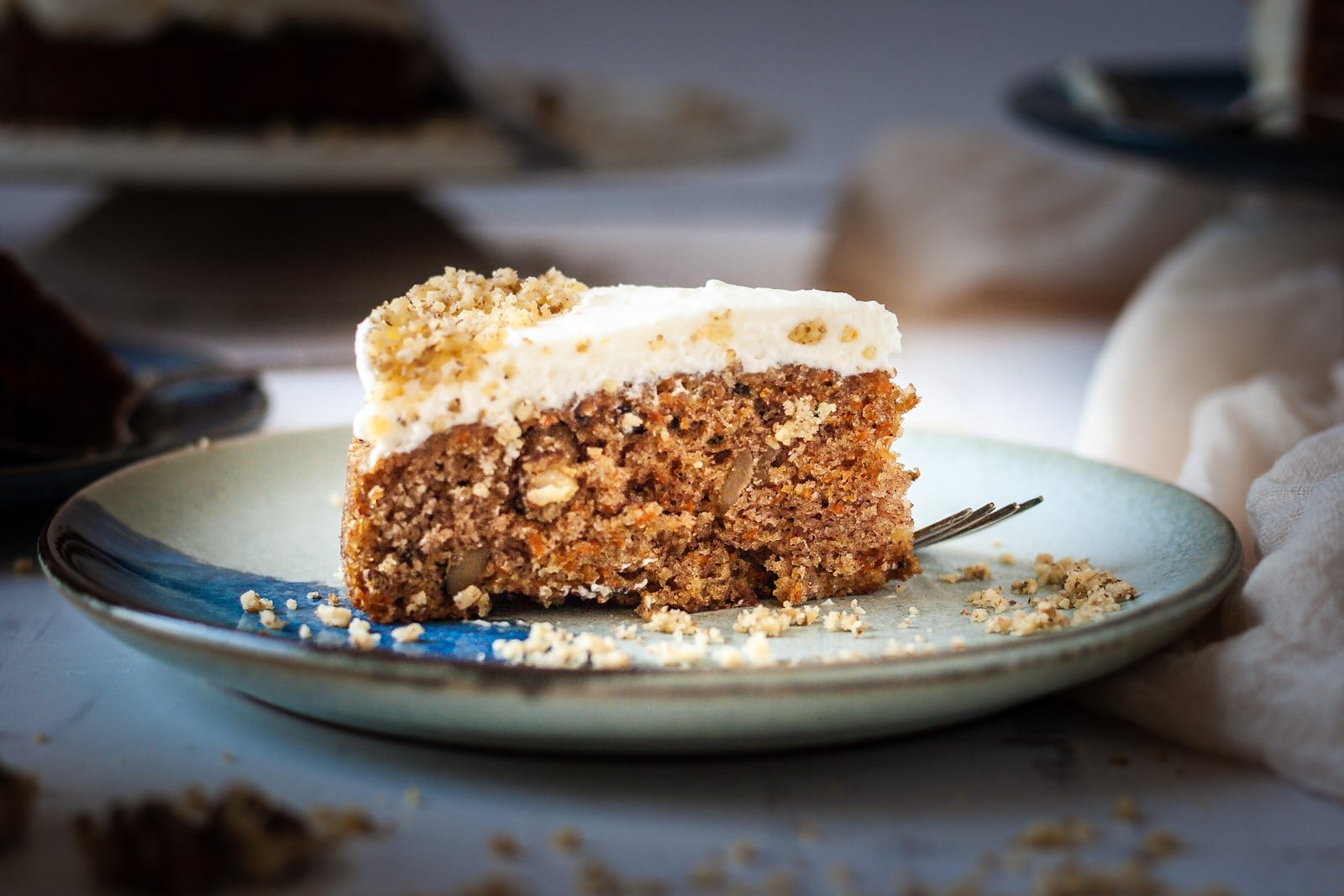 I have had a lot of carrots cakes in my life. I worked at Baker Square as a kid, so I have been eating carrot cakes for a long ass time. And after testing this recipe and using it as the carrot cake recipe at the bake shop I managed a few years ago, and further having made this for about 30 people at different times (all have asked for it again or the recipe), I think if I say it is the best, than it is.

What makes yours the best carrot cake?

How about some tips for carrot cake baking?

You know it. I am never lacking for talking tips.

Use oil. I say in pretty much every cake post, I am an oil-only cake girl. I just like the crumb it creates in cakes better.

Don't skimp on the cinnamon. You're gonna look at this recipe and laugh because it looks like a sh-t ton of cinnamon. It works. Trust me. This carrot cake doesn't have a lot going on outside of carrots and adding a fair amount of cinnamon gives it warmth and some depth.

Toast those walnuts. I cannot say this enough. ALWAYS ALWAYS toast your nuts. Even if a recipe doesn't call it out specifically, do it anyways - don't even ask.  I promise you that you will not regret it.

Shred or grate whole carrots - do not use pre shredded carrots. This is probably my best tip here, and the one you'll wanna roll your eyes at because, well, it's extra work. But the payoff is worth it. And I mean, it takes maybe two solid minutes of grating on t box grater. Pre shredded packaged carrots are shred too thick and they are so damn dry. You will immediately notice all the water present in the fresh grated carrots and this is what you want...it makes for an extra moist carrot cake.

Last thing - with the Easter holiday right around the corner, I want to say that carrot cake is an excellent make-ahead cake. It doesn't look moisture or texture a few days out. In fact, I think it's best eaten the day after it is baked and assembled. Just make sure to store covered in the fridge (cream cheese frosting ya know). 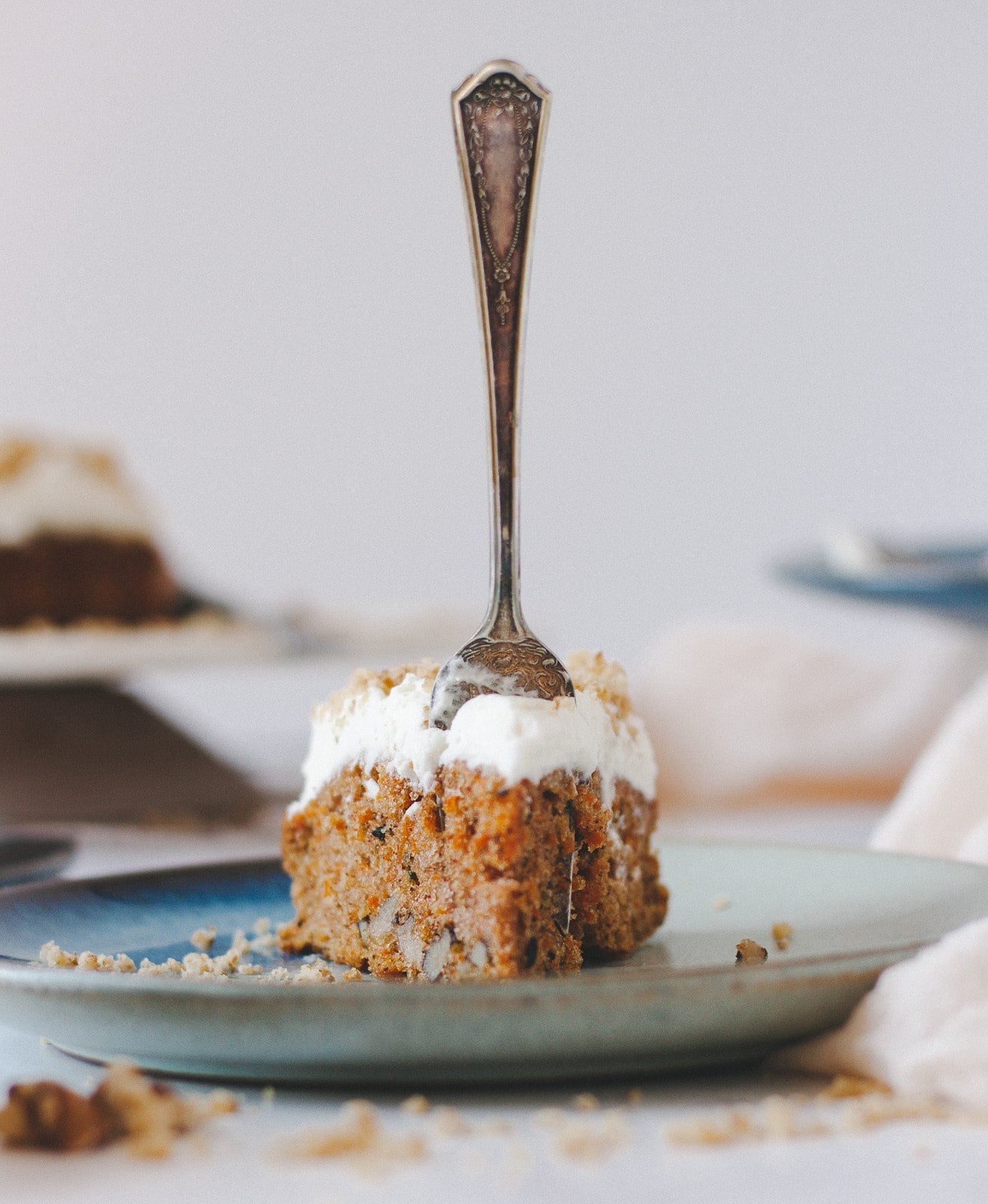 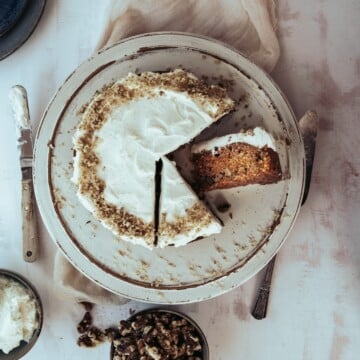 Note - this frosting recipe is enough for a two-layer cake. Making this one layer, as I have, you might not use all the frosting, or you will have a sky high frosted cake (which is not a bad thing either). Use your judgment, here. Put as much frosting on as your like. The leftover will keep in a container in the fridge for a week. If you don't think you will use it, half the recipe.
Tried this recipe?Let us know how it was!