Magic bars made extra magical came about by accident. And when I say by accident, I mean I drank an entire bottle of wine one night last week, decided it was the perfect time to also follow a recipe and bake something. 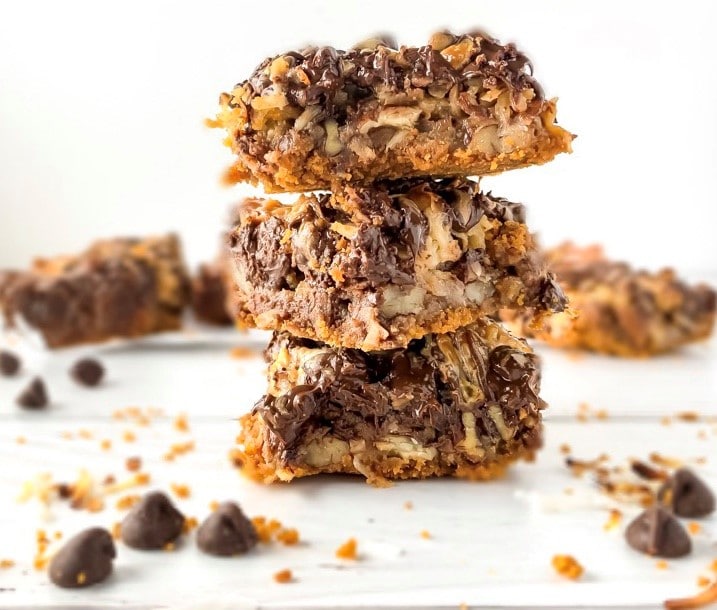 I am not a big drinker. Maybe I have outgrown it, maybe I prefer to save my caloric intake for food or maybe I am just not into a two day hangover that comes along with it, I don’t really know.
Something I do know, however, is that when I do drink I tend to think I can do awesome things.
Dancing would be one of those awesome things…that I THINK I can do. Gymnastics is up there too, and baking too so it seems. I will tell you, I got a blood bruise on my kidney dancing my way right off my friend’s deck one time, and a rather larger laceration on my head doing a cartwheel into my swimming pool once, but drinking wine a few nights ago produced something that didn’t require a doctor’s visit and won’t make my friends laugh at me for the next twenty plus years of my life.
I was enjoying the quiet, gorgeous privacy that is achievable almost never with three kids, with a nice bottle of some kind of white wine I will never drink again. Don’t ask me the name of it, I am not at all a wine person, I just know it had a picture of a running dog or a hopping kangaroo on it, I think. There was definitely and animal on the bottle. Or maybe the word Cake? Is that a wine? Anyhow, I was relaxing and riffling through Pinterest, and about halfway through the bottle I found a recipe for magic bars. 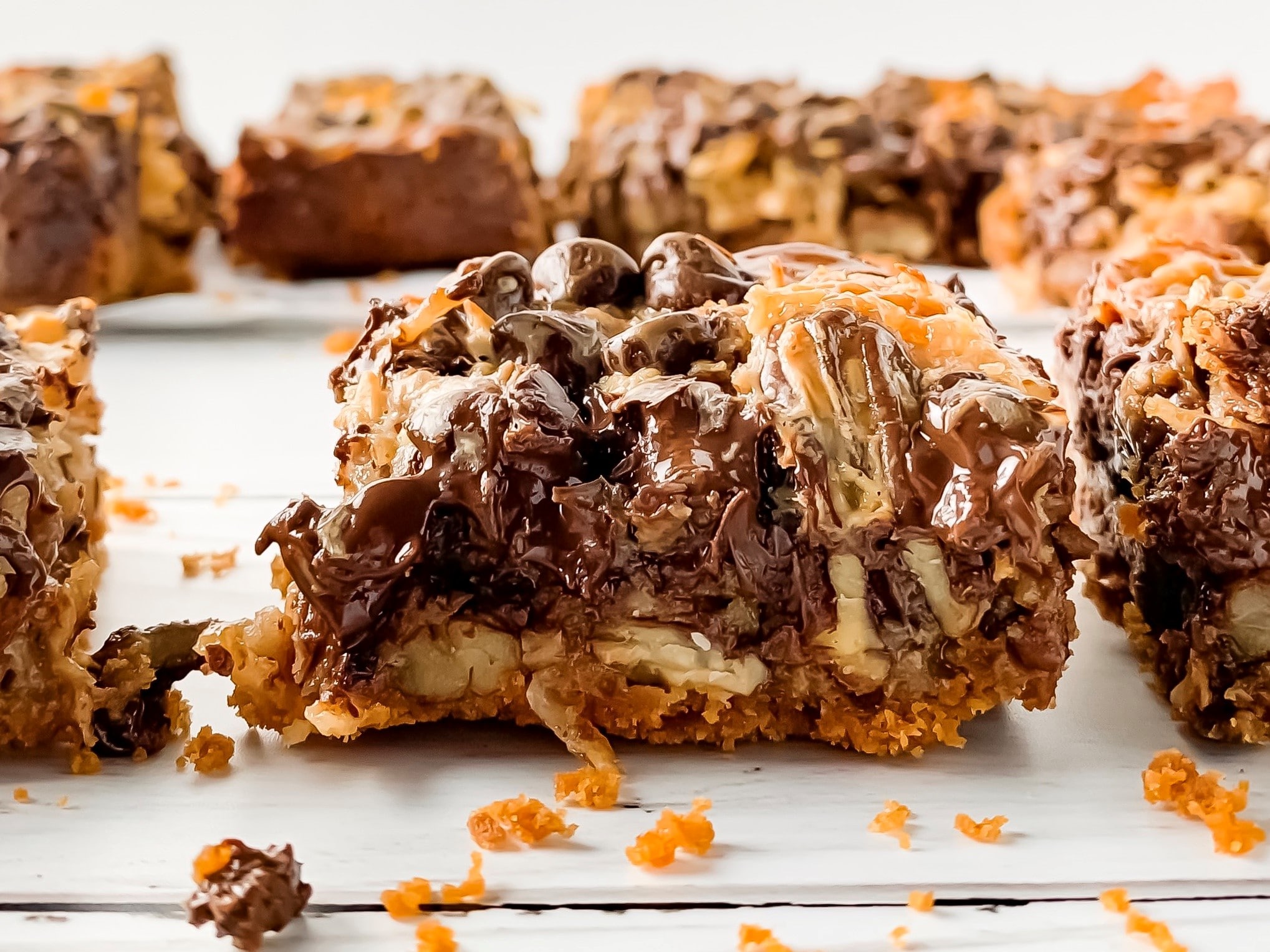 My mother used to make these and I love them, but I have never made them. I knew what was in them, graham crust, coconut, chocolate chips, butterscotch chips, blah, blah, blah, but these ones were different. Skimming the recipe, I read the words “homemade butterscotch sauce.” I continued sipping my white wine, and I went about Pinterest without another thought. Another glass later and I went back to that recipe and again, I read “homemade butterscotch sauce,” nowhere did it say butterscotch chips, and I thought, well this is kinda awesome, and since I don’t have butterscotch chips I can make this right f’ing now, because I know how to make homemade butterscotch and I have condensed milk, graham crackers and the rest of it on hand…I’m gonna go make this shit right now.
So without a drunk stumble (yet), into the kitchen I went, with my cheap wine to make butterscotch sauce and these magic bars.
The next morning, I awoke to a headache, the awesome kind you only get from wine and that only a morphine drip can take away, and cut into them to go with my morning espresso. They were a tad stickier than what I remembered magic bars to be, and I was looking at the recipe again while eating…graham crumbs, toasted coconuts, butterscotch chips, chocolate chips, blah, blah, blah. I read again, thinking my hangover has impaired my reading ability. Nope. Butterscotch chips. Butterscotch sauce was nowhere at all on the entire page. Neither was the word homemade listed anywhere in the ingredients at all. Wtf was all I could say…that and why can I not access morphine for this headache. 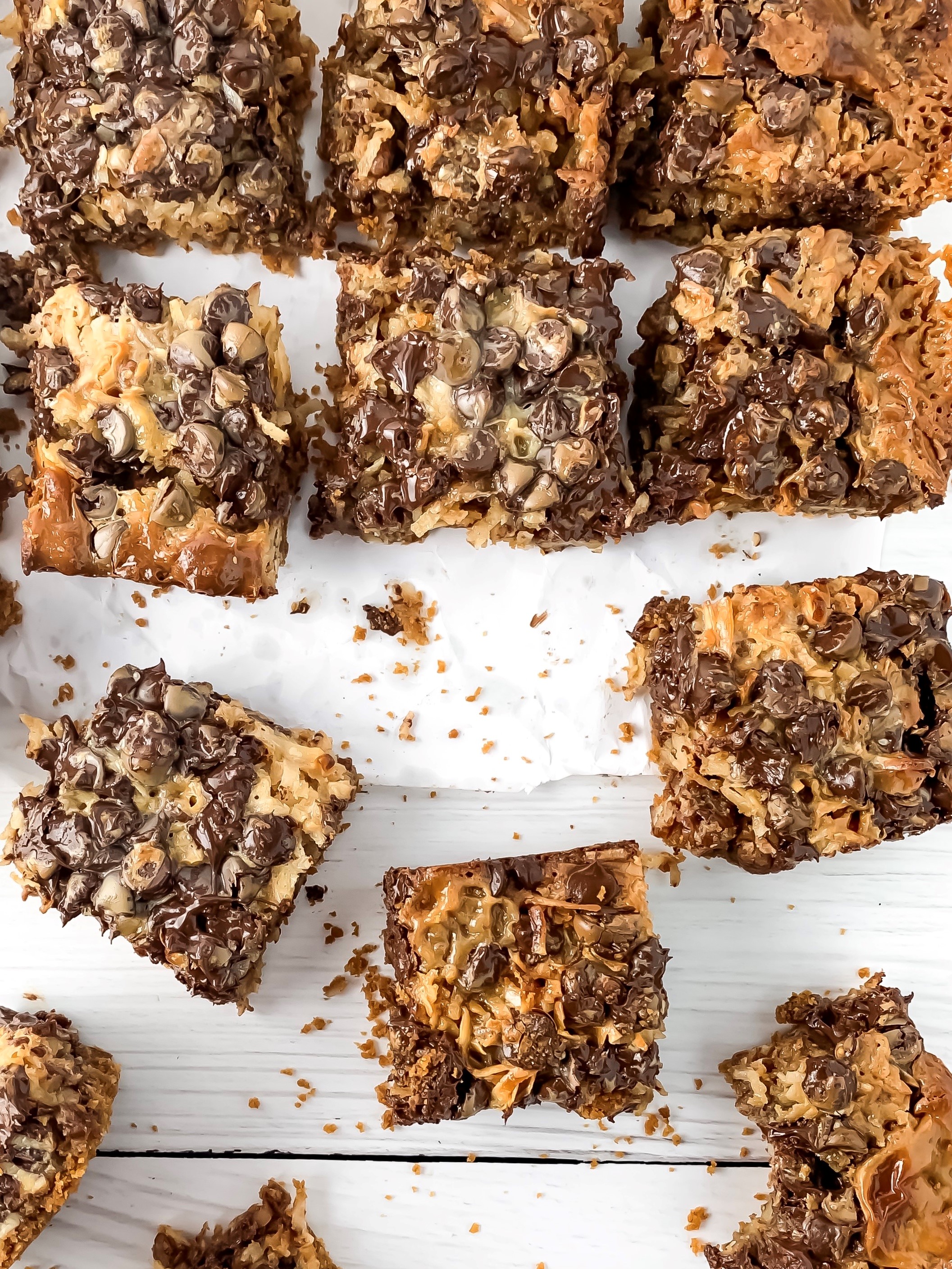 Doesn’t matter, totally worth it. These are spectacular albeit slightly chewier and sweeter than what you know to be magic bars, and while not a simple, they are simple enough to throw together while drinking.
Thank you wine with a dog or a kangaroo or cake something on the bottle, for this made up recipe... 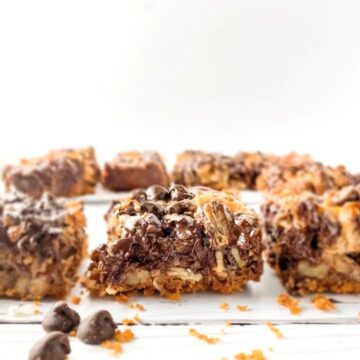