For a while I thought maybe I just didn’t like banana bread.  Eating bananas by themselves is not something I really enjoy, but I love my banana cake and I love banana cream pie, so I couldn’t figure out wtf my problem was with the bread.  I have been making it forever, and I have been through like 28 different recipes and could not find a favorite.  Until this one.  And I owe this one mostly to my Hawaiian vacation a few months ago.

One of my favorite parts of the trip was the day trip we took around the entire Maui island on a big Harley.  It was awesome for one, because I had never been on a motorcycle before and I was fantastically excited and nervous as hell at the same time.  He used to have one so he knew what he was doing, I, having been with him in a car, was petrified that this was going to be my last day on Earth. We were driving around the northern edge of the island then through the mountainous upcountry (kind of through the middle of the island) til we hit the southern coast.  And when I say northern edge, I mean the literal edge…cliffs that had unpaved road and dropped sideways into the ocean with no rails of any kind and dirt road so skinny one Harley could barely fit so God help us if someone was coming around a sharp turn the other way. 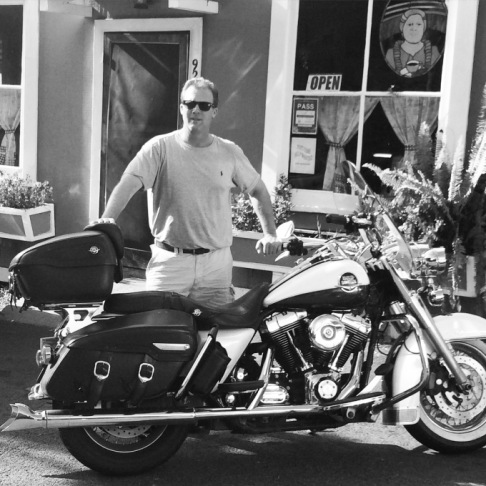 I took his picture, but I was on it for real. Seriously awesome.

But whatever, my post-divorced self was going to more adventurous and open so I was all in if he was.  Aside from cliff diving into the ocean one day, this was the best part of the 12 days. We both had just the best time…it poured rain on us, we got chased by a wild dog, and we didn’t drive off a cliff and die.  We met some pretty cool local mountain people who lived in shacks…and one of them made the best bread I have ever eaten in my life.  She had no teeth, spoke about two words of English, but this older woman had the best banana bread ever that she baked with bananas, pineapple and coconuts right there next to the garage-sized shack she lived in and sold the bread out of.  It was the perfect combination, it wasn’t too sweet, and there was huge chunks of pineapple in it and just enough coconut to give it the tiniest touch of flavor. The star of the bread was the bananas, and it was like everything else was put in as a condiment to lift up the banana. Perfectly moist, not too dense…just f’ing awesome.

I have tried to merge different elements from recipes to make the closest version I could of this bread and I couldn’t get it.  Maybe it was being on Maui that gives me a different memory of how incredibly good it was or why I don’t think mine was even close.  But this weekend I gave it one last shot and got the best version I could and I ate half the loaf in a day.

This bread is not too sweet, and while it doesn’t have fresh pineapple, the crushed pineapple keep the bread moist…note there is no coconut in this bc I just can’t get the same texture or coconut flavor using shredded coconut I have, even the unsweetened coconut flakes just didn’t do it right, so I leave it out, but by all means, throw some in if you want.  But honestly, get yourself to Maui for the real deal, you won’t be sorry.  Find Lorraine in a lil shack off a cliff town on the northern most part of the island. You will thank me one day. 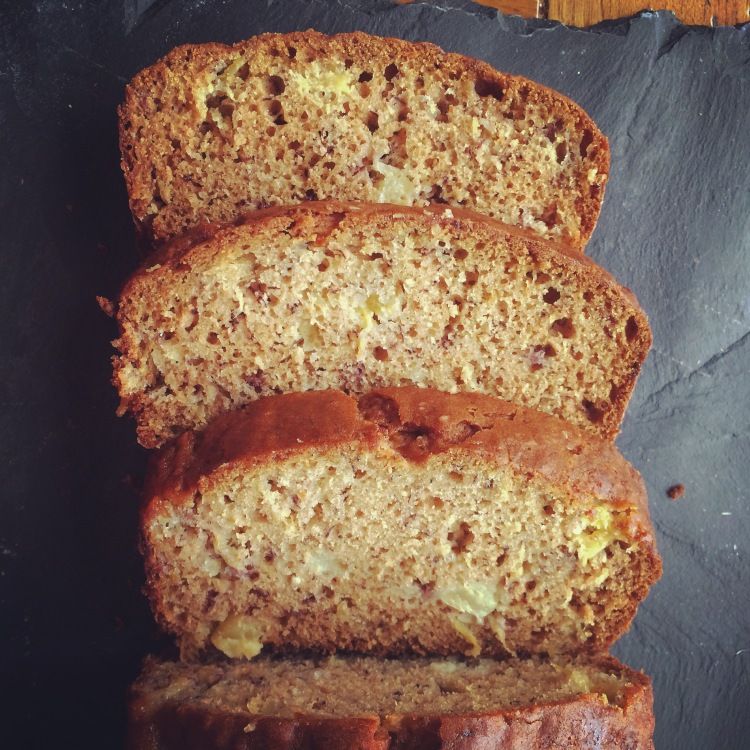 Best Banana Bread
1 2/3 cups all-purpose flour
1 ½ teaspoon baking soda
¼ teaspoon ground cinnamon
1 teaspoon salt
1 cup plus 2 tablespoons sugar
2 eggs
1/2 cup oil
8 ounce can crushed pineapple
3 ½ bananas, very ripe, mashed
2 tablespoons sour cream
1 teaspoon vanilla extract
Heat oven to 350. Butter and flour a loaf pan.
Whisk together the flour, baking soda, cinnamon and salt.
Beat sugar and eggs with a whisk until light and fluffy, about 5-8 minutes. Drizzle in oil. Add mashed bananas, pineapple, sour cream, and vanilla. Gently fold in the flour mixture and mix only to combine (do not overdo it). Pour into a lined loaf pan and bake for about 1 hour.  Cool for 15 minutes in the pan and then turn out onto a wire rack and cool completely.

My mission is to bring life to amazing food and recipes with a few tips and humorous stories (and a few swears) about life with a big, loud and crazy family. My recipes are accessible, adaptable and designed for any home cook to prepare and enjoy.

Never miss a thing - sign up to receive emails of new posts and recipes.