I am just gonna start this post by saying this, while I am posting this in the anticipation of Superbowl this coming Sunday...

You do not EVER need a special day or excuse to
make the best pulled pork nachos.

Now that I got that out of my system (and I really meant it), I can tell you about our favorite pulled pork nachos recipe. Nachos is something everyone loves. I don't even like cheese, but I will still eat the sh-t out of a big ole platter of nachos. 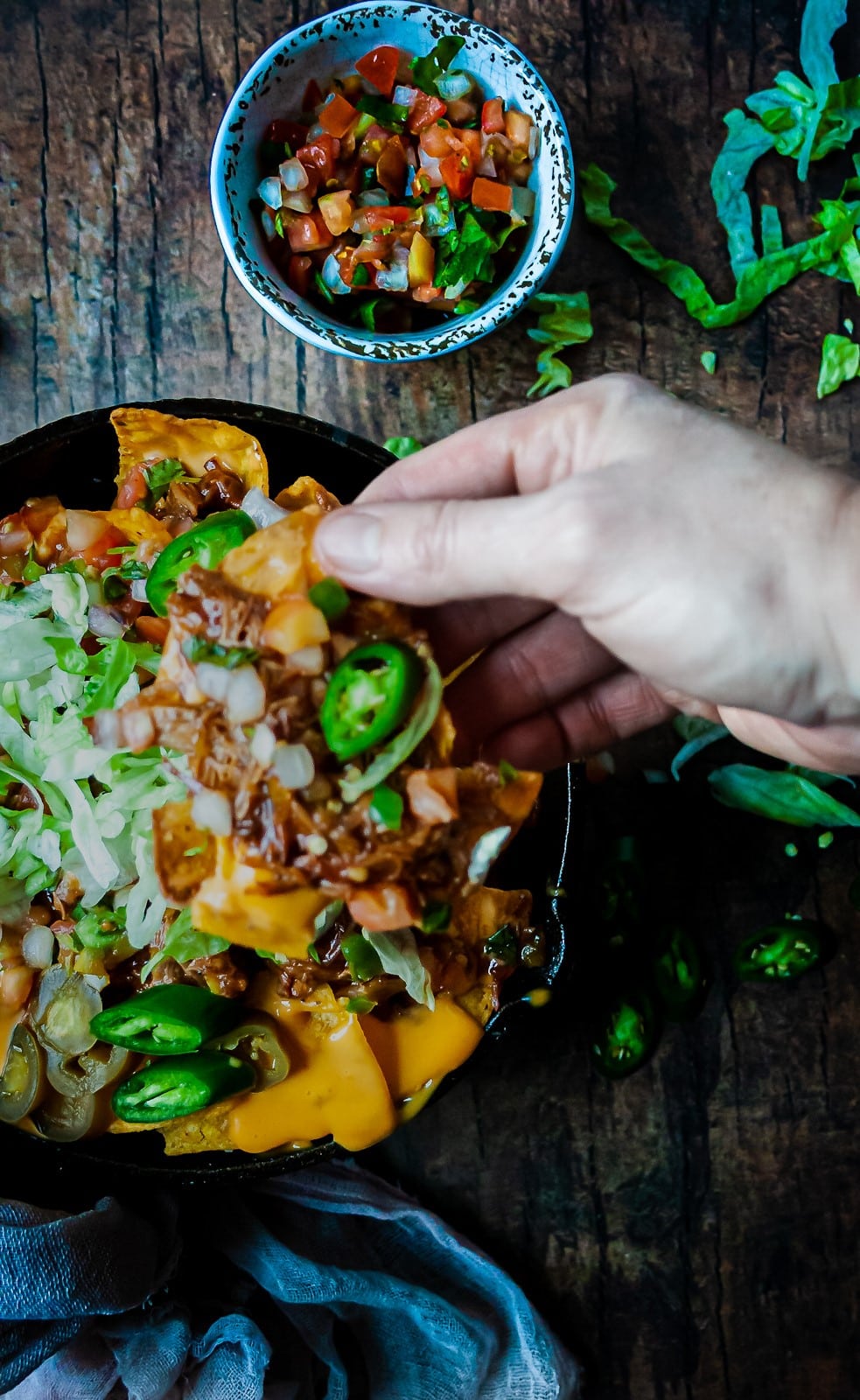 Several things, but what really puts them over the top for me is that these are bbq pulled pork nachos. Not just pulled pork, but pork covered in bbq sauce. And since it is bbq pulled pork, you can use leftover pulled pork (I have so much in my freezer). Alternatively, you can make it (slow cooker recipe here, oven recipe here). And finally, you can buy it from your fave bbq spot or the store (this is one I have bought in a pinch and loved).

Ok, bbq pork, what else makes these bbq pulled pork nachos the best?

I mean, everything really does, but the other element that I would say takes these to 'best" level is the glorious homemade cheese sauce. I am not a melty, stringy cheese person. That cheese pull on so many food pics is the epitome of grossness to me, but a velvety, smooth super sharp cheese sauce...HELL YES.

How to make pulled pork nachos.

They are not hard to make, I promise, just have everything out and ready to go when you are ready to assemble and eat. You begin by warming a single layer of chips in the oven on a baking sheet or cast iron skillet, then you layer some cheese on, more chips on top of that

My recommendation for topping these (aside from the obvs pork and cheese sauce)...

The thing about 'wet ' toppings. So I am leaving off things like salsa, sour cream and guacamole in mr reco list above because while these are absolute necessities (IMO) for nachos, i think they should be left on the side. You and whoever else is lucky enough to enjoy your nachos can top their serving with all the salsa, sour cream and guace they want. Two big reasons I am advocating for this: 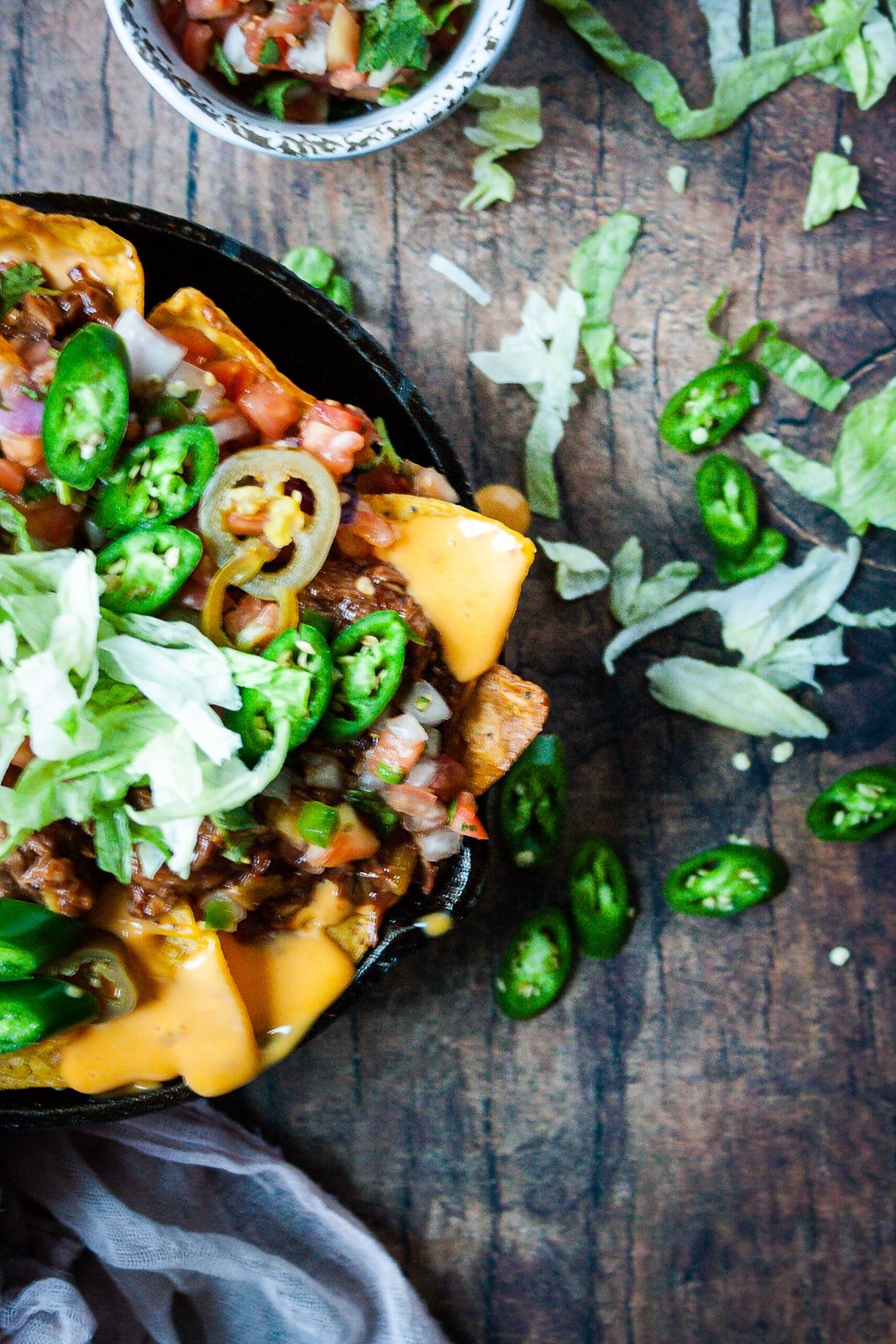 About that cheese sauce...

I'm just gonna say this right now, and maybe I should have said it first, making your own cheese sauce IS AN ABSOLUTE MUST. Really there is no other option, and you will agree once you make it. It is ridiculously simple to make and is so so so much better than any jar you could buy at the store. I super promise you this. 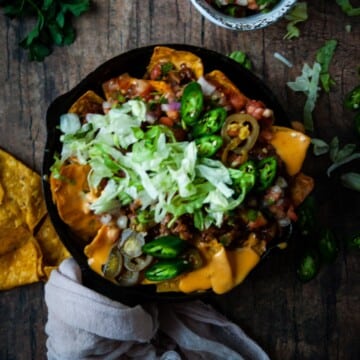 For the white sauce

To make the cheese sauces

To make the nachos